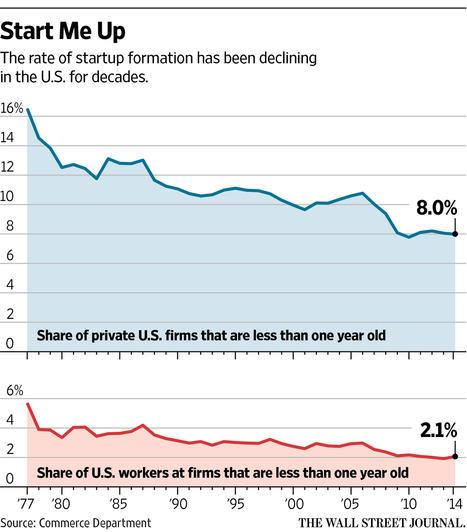 (p. A2) The U.S. economy is inching along, productivity is flagging and millions of Americans appear locked out of the labor market.
One key factor intertwined with this loss of dynamism: The U.S. is creating startup businesses at historically low rates.
. . .
The share of private firms less than a year old has dropped from more than 12% during much of the 1980s to only about 8% since 2010. In 2014, the most recent year of data, the startup rate was the second-lowest on record, after 2010, according to Census Bureau figures released last month, so there’s little sign of a postrecession rebound.
. . .
Rules and regulations also could be at play. Goldman Sachs economists in part blame the cumulative effect of regulations enacted since the Great Recession for reducing the availability of credit and raising the cost of doing business for small firms, making them less competitive.
. . .
There is some disagreement on whether tech firms have fallen into the same doldrums as other startups like mom-and-pop shops. Mr. Haltiwanger and colleagues at the Federal Reserve and Census Bureau find evidence they have, with significant detriment to the economy.
“It may be that we are designing things here in the U.S. as rapidly as ever,” Mr. Haltiwanger said. “We’re just not producing here. That’s not good news for U.S. productivity.”
Researchers at the Massachusetts Institute of Technology delved into state business licensing information and found somewhat different but also discouraging results. That is, tech entrepreneurs are generating good ideas and founding companies at a healthy pace, but those ventures aren’t breaking out into successful big companies.
“The system for translating good, high-quality foundings into a growth firm, that system seems to have broken,” said Scott Stern, an MIT professor and co-author of the study on startups.

For the full commentary, see:
Sparshott, Jeffrey. “THE OUTLOOK; Sputtering Startups Weigh Down Growth.” The Wall Street Journal (Mon., Oct. 24, 2016): A2.
(Note: ellipses added.)
(Note: the online version of the commentary has the date Oct. 23, 2016 title “THE OUTLOOK; Sputtering Startups Weigh on U.S. Economic Growth.” The passages quoted above include a couple of sentences that appeared in the online, but not the print, version of the article.)