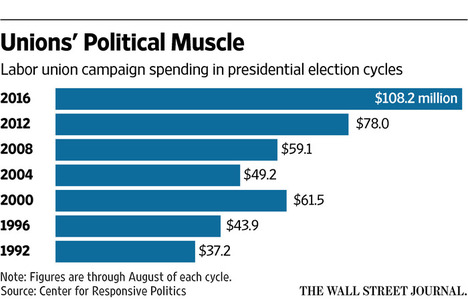 (p. A1) PHILADELPHIA–U.S. labor unions are plowing money into the 2016 elections at an unprecedented rate, largely in an effort to help elect Hillary Clinton and give Democrats a majority in the Senate.

According to the most recent campaign-finance filings, unions spent about $108 million on the elections from January 2015 through the end of August [2016], a 38% jump from $78 million during the same period leading up to the 2012 election, and nearly double their 2008 total in the same period. Nearly 85% of their spending this year has supported Democrats.

For the full story, see:
BRODY MULLINS, REBECCA BALLHAUS and MICHELLE HACKMAN. “Labor Unions Step Up Presidential-Election Spending.” The Wall Street Journal (Weds., Oct. 19, 2016): A1 & A4.
(Note: ellipsis, and bracketed year, added.)
(Note: the online version of the story has the date Oct. 18, 2016, and has the title “Unions Up the Election Ante.”)